He was born in Rionegro, Colombia. Growing up in the most suburban neighborhoods of Colombia, Pablo met crime at a young age. He continued his career of crime with theft and afterwards with smuggling. With his ambition and brutality, he rose to the top in a very short time and managed to become the leader of one of Colombia's biggest crime cartels. They called him El Patron now. After a while in this crime empire he began to come into conflict with everyone. Pablo, who had already learned of an operation to be made, reached David King, who he worked with for many years while serving in the CIA. Pablo, who escaped from Colombia with the help of David, met Gladio. He couldn't come back anymore because his opponents had taken away everything that was his. The only way for El Patron where he could turn his skills to profit was to join Gladio. 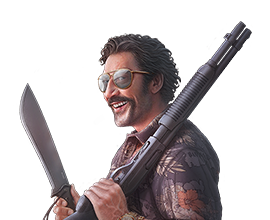