Originally born in Manisa, but because of her father's mission, she spent all her childhood in Ankara. She is the only child of Akin Yilmaz, one of the legendary policemen of Ankara. Since she was raised in one of the Ankara's most dangerous neighborhoods, she felt that she belonged to that there. She was so attached to the neighborhood and to her friends that she carried signature tattoo of the neighborhood on her wrist. Zeynep was taking example of her father at an early age, the only dream was to be a successful cop like her father. The year she joined the Police Academy, she was shaken by the sudden death of her father. Even though she thought Sahin Kiliç, who she had loved like her uncle for a long time, her father's killer it didn’t took long to learn the truth about her father’s death. When she learned about Sahin’s innocence, her only goal was to finish the Gladio, which killed her father. Sahin stood by Zeynep and gave her special training. With Sahin’s advices she resumed Police Academy and graduated with first degree. With her keen mind, courage and marksmanship she stood out from her peers and continued her duty. 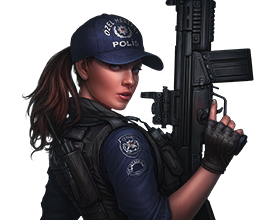