Born in Ashkelon. His family members were working as factory workers. Larry was a brilliant student. After finishing high school, he was accepted by the Harvard University as a scholar. He studied International Relations and later, he started to work at a firm operating in Middle East and became the manager in charge of operations in Middle East. Strategies that he designed for companies were especially appreciated by intelligence agencies. Everything was going well for Larry, until he learned that he had lost his entire family in a rocket attack on Ashkelon. After the attack he joined Mossad with the desire to clarify the incident and find whoever is responsible. He was a very successful agent with lust for revenge which consumes him. A Gladio agent in Mossad approached Larry and took him to Gladio which promised him to take his family's revenge. Therefore Larry became a Gladio agent. 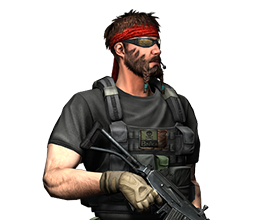